The 2016 Nobel Prize in Physics celebrated the rich behaviour of two-dimensional (2D) materials, like atoms, molecules, or electrons that are confined to move on a flat surface. 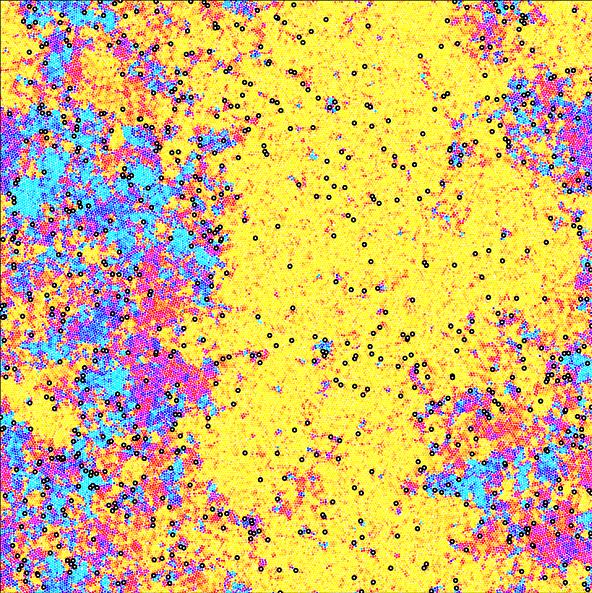 Compared to their three dimensional (3D) counterparts, such materials exhibit new and exotic properties, the elucidation of which is at the cutting edge of condensed matter physics research.

A very interesting case is the behaviour of 2D crystals. Unlike 3D materials, which always melt into a liquid state or `phase’, theory predicts that 2D crystals melt into a new phase called the hexatic.

Even for the simplest 2D model material, composed of identical hard disks, finding confirmation that a two-dimensional crystal melts into a hexatic phase was one of the longest standing problems in physics.

After numerous attempts (spanning four decades) it was solved in 2011 with the use of large scale computer simulations.

In a collaboration between two GW4 universities, Dr John Russo from the University of Bristol’s School of Mathematics and Professor Nigel Wilding, from the Department of Physics at the University of Bath, have harnessed the combined power of the high performance computers in both universities to show that the behaviour of 2D crystals becomes even stranger when mixtures of two types of particle are considered.

Their findings have been published today in the journal Physical Review Letters.

Dr Russo said: “For this research we considered the 2D hard disk system studied previously, but with a twist: we introduced a second species of disk which is only 70 percent as big as the others.

“Interestingly we found that the presence of this second type of disk makes the hexatic phase disappear.”

Professor Wilding added: “This occurs at surprisingly small concentrations of the small disks: swapping just one percent of the disks for the smaller species is enough to lose the hexatic.

“We found that the hexatic is such a delicate state of matter because its entropy is only slightly greater than that of the liquid.

“Adding small particles raises the entropy of the liquid and this in turn destabilises the hexatic.”

The researchers say their study contributes to the fundamental understanding of the fascinating Physics of matter in two dimensions, and opens the doors to the design of new materials with strange and exotic properties.

Read the full paper, ‘Disappearance of the hexatic phase in a binary mixture of hard disks’ by J. Russo, and N. Wilding, in Physical Review Letters.

The image accompanying this article is a snapshot of the hexatic phase in 2D hard disks, copyright University of Bristol.