GW4 Isambard is the world’s first Arm-based supercomputer to go into production use, and the largest Arm-based system outside of the U.S. 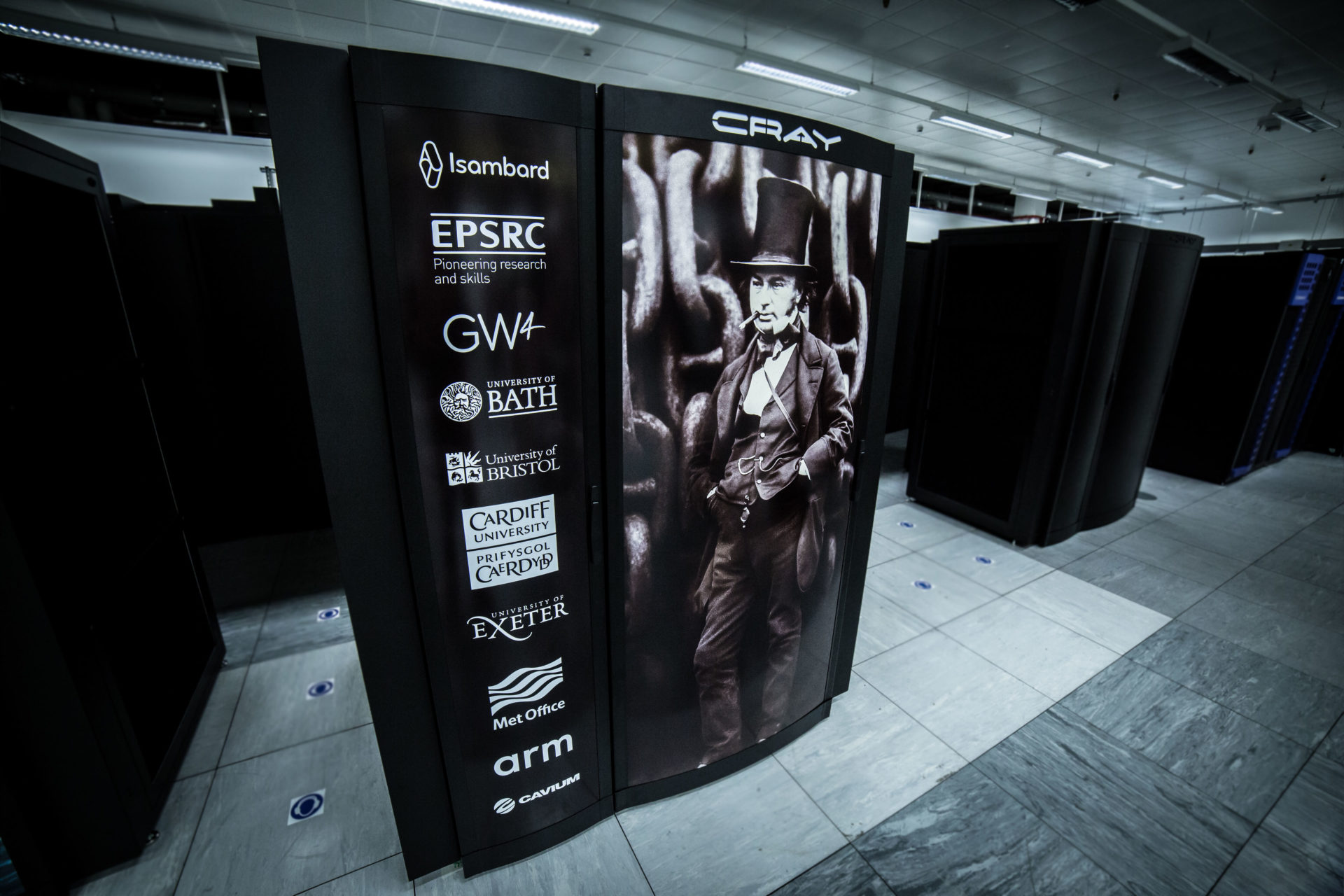 The GW4 Alliance, together with global supercomputer leader Cray Inc. and the Met Office, was awarded £3m by the Engineering and Physical Sciences Research Council (EPSRC) in 2016 to deliver a new Tier 2 high performance computing (HPC) service for scientists. This unique new facility was named ‘Isambard’ after the renowned Victorian engineer Isambard Kingdom Brunel.

Through the GW4 Alliance network researchers and scientists from different disciplines were able to collaborate with our partners to design the supercomputer and achieve something that would not have been possible as individual institutions.

Due to the success of Isambard, GW4 and our partners secured a further £4.1m from EPSRC in February 2020 to create Isambard 2, the largest Arm-based supercomputer in Europe.

This ambitious project exemplifies university-industry collaboration and the world-leading capability of the South West England and South East Wales region in advanced engineering and digital innovation.

The GW4 Isambard project set out to prove that a new Arm-based technology was relevant to supercomputing. Arm develop the processors found in most mobile phones and tablets but until GW4 Isambard had never been used in servers or supercomputers before. Isambard includes over 10,000, high-performance 64-bit ARM cores, making it one of the largest machines of its kind anywhere in the world.

Dr Paul Selwood, Principal Fellow in Supercomputing at the Met Office said: “The Met Office is proud of being both the host for Isambard, and a fully contributing member of the project. Isambard has been of great value to the Met Office, providing an excellent platform to develop our next generation weather and climate models.” 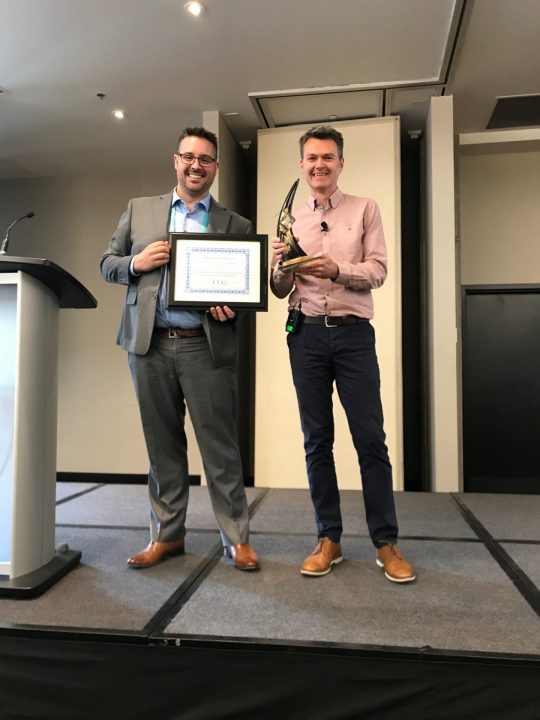 Isambard has received global and national recognition from both the academic and industrial communities.

The GW4 Alliance was shortlisted under the category of Technological Innovation of the Year at the Times Higher Education (THE) Awards in 2017 for our world-first supercomputer, Isambard. The THE Awards are often called the Oscars of the higher education sector, attracting hundreds of entries each year from UK universities, honouring creativity, efficiency, and innovation.

At the long-standing Cray User Group conference in Montréal, May 2019, the Isambard benchmarking paper was awarded the Best Paper prize. The Isambard paper beat off high-quality submissions from top HPC sites around the world, including all the large HPC labs in the USA, Europe and Asia.

Isambard has had a significant international impact, being the first production supercomputer based on Arm CPUs. As such, it has received a lot of positive PR, and our software and benchmarking activities have made major contributions to the UK and international communities. Isambard is regarded as one of a few key systems that is changing the face of HPC. A recent article on The Next Platform stated Isambard was second in the world only to the ‘Astra’ Arm-based system at Sandia, a machine 15 times larger than Isambard. (Astra has since commenced classified operation, leaving Isambard as the leading open-science Arm-based service in the world today).

With over 350 users from all over the world, Isambard is already one of the most widely used Tier 2 systems. The GW4 Isambard team ran their first hackathon at Cray’s UK headquarters in Bristol in November 2017. The event attracted over 30 software developers from across GW4, the Met Office and Cray, as well as international institutions. Significant technical progress was achieved, and since then Isambard has been a great enabler of advanced tutorials for GPU programming and porting to Arm, with 22 courses and hackathons supported for over 300 attendees to date.

Members of the Isambard team have been invited to speak at international conferences about the GW4 Isambard project and what science it is yielding. The GW4 Isambard PI, Professor Simon McIntosh-Smith was invited to give the only keynote from an external speaker at the Arm Partner Meeting in 2019.

Isambard is a Cray XC50 system with Marvell ThunderX2™ processors based on the 64-bit ARMv8-A architecture. Isambard 2 will double the size of Isambard to 21,504 high performance cores and 336 nodes.

Isambard 2 will also incorporate the latest novel technologies from HPE and new partner Fujitsu, including next-generation Arm CPUs in one of the world’s first A64fx machines from Fujitsu. 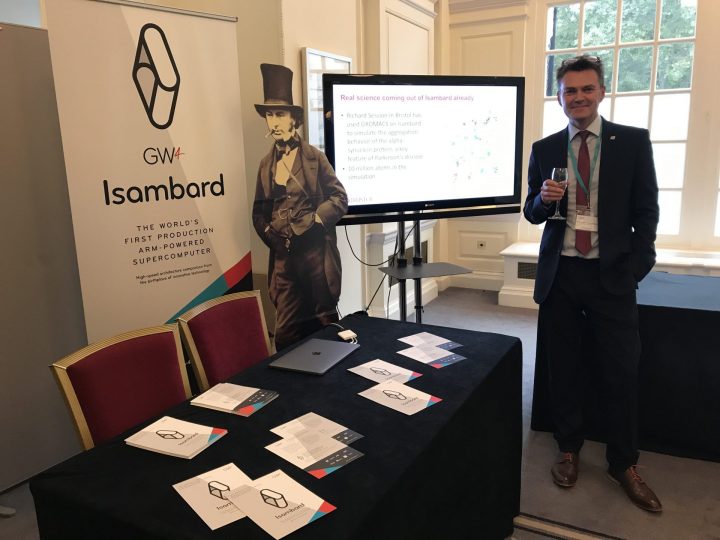 Professor Simon McIntosh-Smith (pictured, left), the principal investigator for the Isambard project and a professor of high-performance computing at the University of Bristol said: “We are looking forward to innovating and pushing the boundaries further with Isambard 2 and witnessing the tremendous performance that will come about on the Cray A64FX Arm supercomputer, utilising Fujitsu’s new processors. It’s crucial for UK scientists to have access to the latest cutting-edge Arm technologies, as they’re one of the most likely paths to Exascale computing and can help researchers solve global challenges.”

Find out more about GW4 Isambard at the Met Office in this film created by ARM.

Building a community to enhance urban infrastructure resilience to flooding